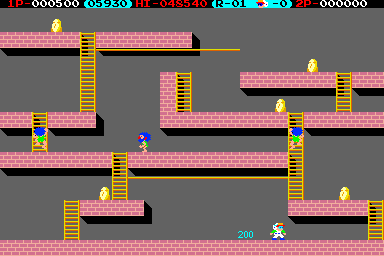 Lode Runner is a puzzle video game, first published by Brøderbund in 1983. Arcade In 1984, Irem developed an arcade conversion of Lode Runner. It contained 24 remixed levels from the 150 original levels. Gameplay Basics The player controls a stick figure who must collect all the gold in a level while avoiding guards who try to catch the player. After collecting all the gold, the player must travel to the top of the screen to reach the next level. There are 150 levels in the game which progressively challenge players' problem-solving abilities or reaction times. Levels feature a multi-storey, brick platform motif, with ladders and suspended hand-to-hand bars that offer multiple ways to travel throughout. The player can dig holes into floors to temporarily trap guards and may safely walk atop trapped guards. Should a guard be carrying a bar of gold when he falls into a hole it will be left behind, and can be retrieved by the player. Over time, floors dug into will regenerate, filling in these holes. A trapped guard who cannot escape a hole before it fills is consumed, immediately respawning in a random location at the top of the level. Unlike guards, the player's character may not climb up out of a hole, and will be killed if it fills before he can escape by other means. Floors may also contain trapdoors, through which the player and guards will fall, and bedrock, through which the player cannot dig. Notably, the player can only dig a hole to the sides, and not directly underneath himself. This introduces an important strategy: when digging a hole X blocks high, the player must first dig a gap at least X wide to be able to dig through it, as the number of spaces will shrink with each layer, and the player needs at least one free adjacent space to be able to dig. However, exceptions to this rule arise when the player digs from the position of standing on a ladder, or hanging from a hand-to-hand bar, which allows the player to repeatedly dig and descend one row. This kind of digging is involved in solving many of the levels. The player starts with five lives; each level completion awards an extra life. Should a guard catch the player, one life is lost and the current level restarts. The player's character can fall from arbitrary heights without injury but cannot jump, and players can trap themselves in pits from which the only escape is to abort the level, costing a life, and begin again.

The Bungeling Empire has stolen a huge cache of gold from its rightful owners, and your mission is to infiltrate its treasury and recapture it. This entails progressing through 150 screens of platforms, ladders and ropes.

The Empire has sent robotic guards down to protect the gold, and contact with any of these will cost you a life. Your method of escaping them is to press fire to dig a hole in their line of movement, thus causing them to fall in briefly, allowing you to move across the gap safely. Once all the gold has been collected, a ladder allowing you to move onto the next screen is added. Completing these screens often requires forward planning and precision.

This was one of the earliest games to include a level editor, allowing the creation of new level designs with no programming skill.

My twin and I played the Mac version of this for waay too long back in the day, and the level editor just ate up additional hours while we concocted traps, mazes and whatnot. Great game!
Reviewer: bcherny - - February 25, 2015
Subject: controls?
hey jason, can you document the controls for this? i love this game but don't remember which button does what. thanks!